Andrea, Halen, and Albrecht navigated loss through the community with the Children’s Grief Center

Albrecht says the process of learning to talk about grief “felt kind of like a plant growing, sprouting into a flower.” 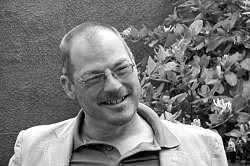 Eric’s family and community, including his music students and fellow musicians, worked hard to surround him with love and appreciation as his illness progressed. 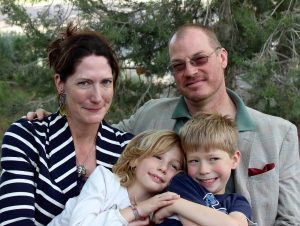 For Albrecht and Halen, now 14, the Grief Center offered a supportive environment where they could express their feelings.

“If everyone else was crying, it was like, I’ll cry too,” Halen said. “It made everyone feel kind of safe … It’s a very tight-knit group of people even once you leave.”

As Halen and Albrecht learned to process their feelings, the family grew closer, said Andrea, Halen, and Albrecht’s mom.

“I became a better human and a better mother because of them fully inhabiting their grief and feelings and us being able to talk about things,” she said.

“It was shocking to me how much anger I had,” Andrea said. “I could talk about it. We got to talk about something that’s not often easy. What do you do with that anger? Where do you put it?”

Eric’s mother also attended the Grief Center with Andrea, Halen, and Albrecht. All the participants ate meals together at the center before joining peer group discussion sessions.

“It was someplace we went where there was a degree of joy in coming together as a community,” Andrea said. 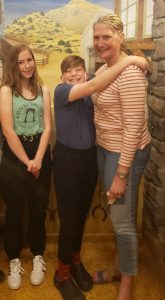 Now remarried, Andrea wrote an opera that includes a character who lost her husband. While the work isn’t autobiographical, Andrea poured her experience of grief into it.

Halen has also found comfort in writing about grief in English class reflections.

For the whole family, the Grief Center provided a place to connect with their community as they navigated grief.

“It’s really great to come together, all individuals feeling loss, a community celebrating that we are connected and are continuing to seek out connections,” Andrea said.