Rachel M, “The Children’s Grief Center gave me tools to be okay.” 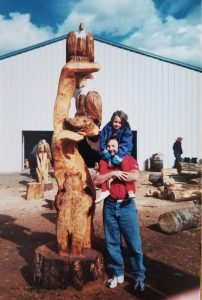 Rachel and her Dad

A sudden, freak accident changed everything for Rachel, her older brother, and mom late one evening in 2002. Her father was in the backyard with her brother testing out a bike ramp when he went off the edge and broke his neck leaving him paralyzed from the jaw down.  Even the bike helmet he was wearing could not protect him from this life-threatening injury. At just 11 years old, Rachel and her family were now faced with the horrible reality of a parent being on life support. It was a huge cloud of so many decisions, decisions that meant he was not going to survive.  His body gave into the injury and he became an organ donor. Rachel remembers those emotional days and nights in the ICU and the nurses who tended to the needs of her dad and her family.  One nurse, in particular, was kind and loving, and very supportive. His compassion stuck with Rachel and would later impact her journey into adulthood. 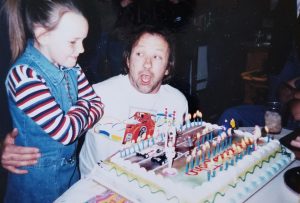 A friend of Rachel’s mom recommended the Children’s Grief Center as a place for them to get support from other families who had lost a loved one. As a teacher and therapist, her mother had already started individual counseling for the family but the CGC was a welcomed complement to being with others going through the same pain.  For Rachel, it was a place to be with kids who understood, who knew what it was like to have a parent die, and would freely express their emotions and grief. She was not alone. She could be a grieving child in a group, share or not share, cry or laugh. It was pizza dinners, crafts, and time to be outside playing.  Having these activities provided a safe place for freely talk about what was going on, how she was feeling, she knew she was understood. The Children’s Grief Center gave her the tools to be okay and was a community where they were all in this together. It was also a place where her mom could also be with parents who had a spouse die, people, she could get together with outside of the group to support each other as they healed their broken hearts.

A few years later a classmate was going through a similar situation with a parent in the hospital. Rachel wrote a letter to the young girl letting her know she understood what she was going through and that if she needed someone to talk to, she was there for her. This was their special bond, someone who “got it” and knew the struggle of having a parent die. The program at the Children’s Grief Center taught Rachel the importance of being there for one another and she was able to give that back to her classmate. 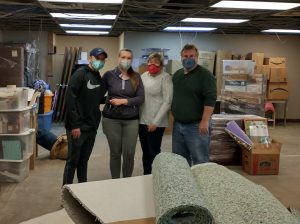 Rachel and family volunteering at the Center for Hope and Healing

Remember that nurse?  Well, Rachel decided to be a nurse in high school but later saw her real passion was teaching and follow the career path of her mom and dad.  She is now teaching nursing which includes a section on Death and Dying. Her real-life experience along with research has provided her with an intimate knowledge on the subject which she openly shares with her students.  She knows that if her childhood grief had not been addressed she could have become one of the negative statistics she reads about.  She is grateful for the Children’s Grief Center and the opportunity to help others by sharing her story.